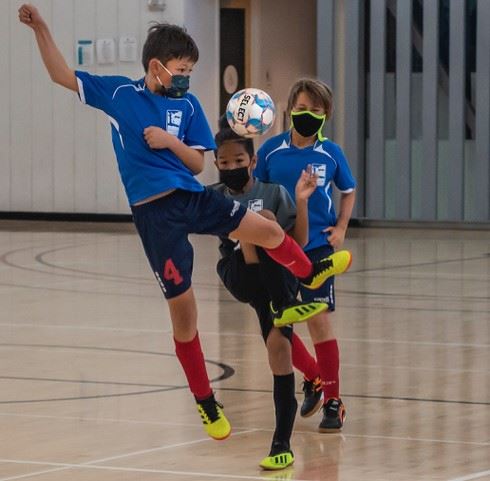 2023 Season Info: Beginning Sunday, January 8, 2023, at SFRPD recreation centers across the city, boys, girls, and co-ed teams, from 5U – 18U, in Recreational, Intermediate, and Advanced Divisions, will compete in our 24th Season of 5-on-5 SFRPD Jose Coronado Indoor Soccer! The rules are similar to traditional futsal – it is a fast-paced, exciting game and the league serves as a great opportunity to develop each child/team’s fundamental skills leading up to the spring outdoor season and, hopefully, a lifelong love of soccer.

Approved Coaches: All Coaches must have passed an SFRPD Volunteer Background Check, show proof of COVID-19 Vaccination, and show proof of completion of Mandated Reporter and Concussion Awareness Training in order to participate.  Each coach will be required to show a picture ID and confirm that his or her name is on our official list before each game begins.

History of the League: In the 1970s and -80s, no one meant more to youth soccer in the Mission than Jose Coronado. For nearly 20 years, he helped the kids he coached on the Guadalajara Chivas club team at Folsom Park learn how to play soccer with passion, become better students, and develop into upstanding members of a community that still thrives today. As an assistant coach for McAteer High School, his teams won city championships in 1984, 1985, and 1986. A native of Guatemala and San Francisco State graduate, he tragically passed away from pneumonia in 1989 at just 44 years old. His friends and family petitioned the city to rename Folsom Park as Jose Coronado Playground. In 1999, seeing a need for a winter soccer program, Jose Guzman, Oscar Jimenez, Frank Cassinelli, and Luiz Azucena, in conjunction with the San Francisco Recreation and Park Department, started the Jose Coronado SFRPD Indoor Soccer League. We would like to thank his friends and family for keeping his spirit alive in the city, neighborhood, and game he loved.

On behalf of the San Francisco Recreation and Parks Department, thank you to all of the players, coaches, parents, referees, and staff for all your support over the years! If you have any questions, please be sure to let us know!

1. You must register by turning in team roster to sfrpdsoccer@sfgov.org

3. Each division in the league is limited to 9 teams. Extra teams will be placed on a waiting list.  The division of each team will be determined by their record and position in the 2020 standings and/or their records in other leagues.

4. The League may rightly exclude from membership, (new or returning) any team whose coach, manager or other affiliated official individual has exhibited conduct contrary to established League Rules.

5. Participants may play for one division only and one team during the entire season. Violation of this rule may result in forfeit from the league.

6. Additions and deletions to the official roster must be done in writing with the league coordinator by the Monday after the second games of the season (1/13/20).  This includes player transfers.  NO other changes will be allowed after this time.

8. Official Rosters / Game Report Forms: Before each game, coaches will need to confirm that their players are listed on the Game Report Form, which is taken directly from the official Rosters.  No player can be on more than one roster.  No player can play that isn’t on the roster.  We will no longer be requiring Player Passes. Everyone’s on their honor.  If we find that a player has played who is not on the roster, the consequences could include suspensions, forfeits, and disqualification from post-season play.

9. If you are participating in State Cup, Association Cup or Founders Cup, your team may be given only one bye for the season. You must notify the league of the date you wish to have as a bye at the time of registration. All other games will be played in accordance with the schedule. There will be no changes after the schedules are finalized. No US Club Cups or any other sectional Cups requests will be granted byes.

10. All U8 & 3rd Grade or younger divisions will not have post seasons. These divisions will be given participation awards. Suitable awards will be presented to the top two teams for U9 divisions and above.

11. The League suggests that all teams do not run up the score on each other in the spirit of good sportsmanship and for the well being of our players.  The actual scores will be reported, but there will be a seven goal differential when computing the standings for U9 and above divisions.

12. Coaches are responsible for the behavior of their players, parents and their fans. Teams are subject to disciplinary action by the board if parents and or their spectators get out of order and or get engaged in unsporting behavior.

13. Make-up games may be allowed on case-by-case basis.  Requests for certain times/dates can be made prior to the publication of the preliminary schedule.

14. Game time is forfeit time, except for the first game of the day when a 5-minute waiting period will be observed or when there are delays from previous games. Teams that forfeit will be charged $100.00 for each forfeit. The forfeit fee must be paid before your next scheduled game via check and made payable to SF Rec and Park.  If you drop out of the league after the schedule is created, you are responsible for the cost of your jerseys plus a 20% cancellation fee.

15. Each team is limited to a maximum of 12 players on their roster with an absolute minimum of 7 players. Teams will have until the Monday after their second scheduled game to make any adjustments to their rosters.The league will charge $25 extra for each additional player beyond the maximum allowed of 12 players.

16. Judgment calls may not be protested. Rule interpretation protests must be reported to the officials at the time of the infraction. All other appeals must be provided in writing, turned in within 3 working days to a league coordinator and accompanied by a check of $50 dollars payable to SF Rec and Park. If your protest is upheld, the $50 dollar fee will be returned.

17. No black sole shoes are allowed on gym floors. All players must wear only tennis or indoor soccer shoes. No jewelry.  No hard casts.

18. No food or drinks are allowed on the court.  Only bottled water is allowed during games.

20. For playoffs and finals when a winner is necessary the following rules must be observed:

b. If tie persist then 5 penalties per side.

c.  If tie persist then 1 alternating penalty per side (sudden death).

21. Tie-breakers –If there are any ties in the standings and when determining seeds for the post-season brackets the following will be observed: a. Head to Head Competition, b. Total Goals Against  c. Total Goal For d. Coin Toss.

23. The league will be accumulating yellow cards. Two yellow cards will equal one red card which will cause the offending player to be suspended for the following game. This rule also applies for playoffs and finals. One straight red card will result in a suspension for at least one game; with the prospect of more games depending on the severity of the infraction (i.e. fight). Any straight red carded player will also not be allowed to physically attend any games as a spectator at any of our facilities for which he or she may be sitting out a game. Non-compliance to this rule may result in the player being ejected from the league.

Laws of the Game - Updated December 2022

Beginning 10/11, players looking for teams will be able to register as Free Agents at Free Agent Registration.
Teams looking for players should email sfrpdsoccer@sfgov.org and let us know how many spots you have available.

In most cases, each team/division will play at just one rec center throughout the season.

Once the schedule is published, there will be NO changes…unless we have written permission from all teams involved.

Below are team forms, documents and resources: