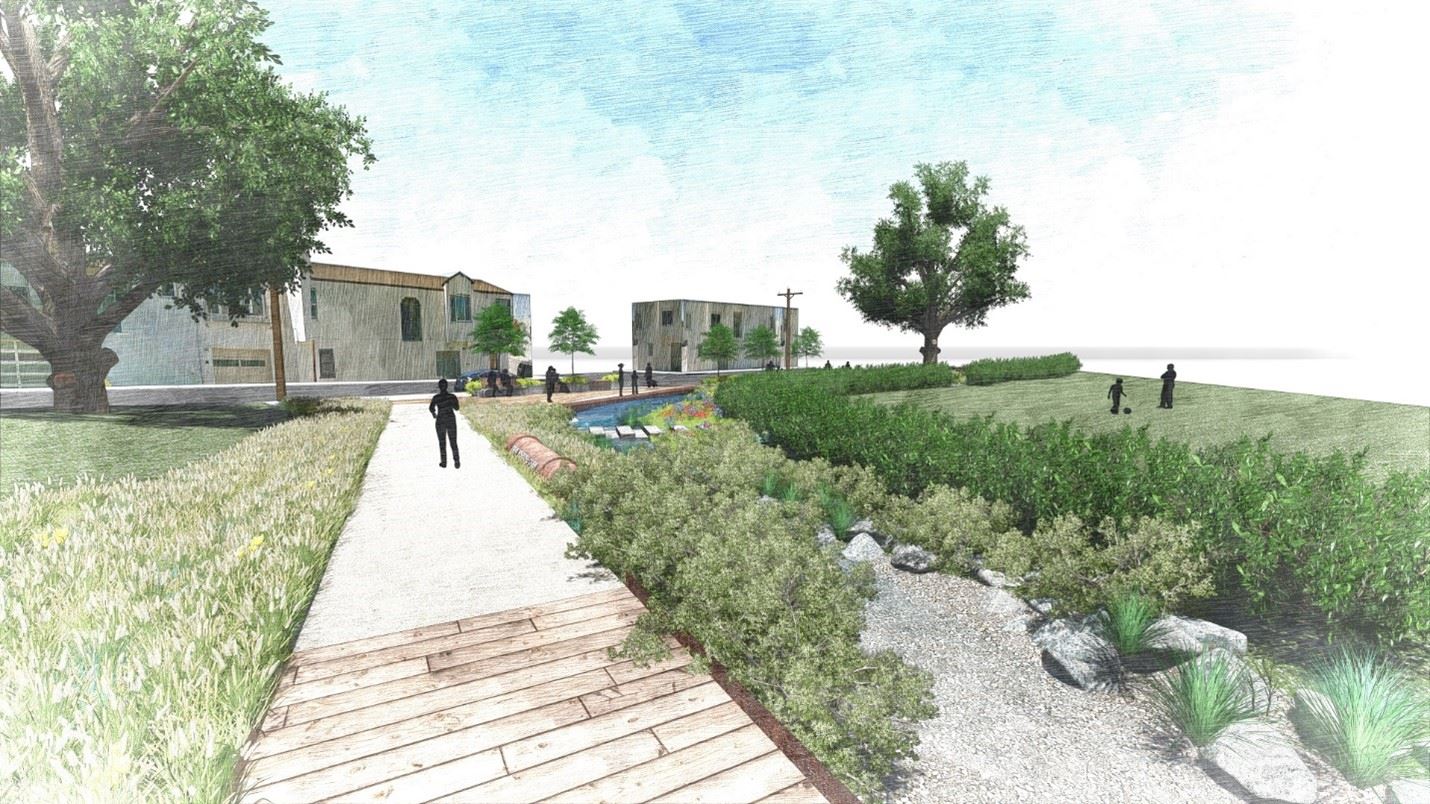 The San Francisco Recreation and Park Department, in partnership with the San Francisco Public Utilities Commission, is daylighting the historic Yosemite Creek in McLaren Park and piloting a high efficiency irrigation/stormwater reuse system at the Louis Sutter playfield.

The Yosemite Creek Daylighting Project is situated within McLaren Park on the northern side, bordering the neighborhood of University Mound. The historic Yosemite Creek passes through Recreation and Parks property in this area.  The scope of work consists of uncovering portions of Yosemite Creek within in McLaren Park from underground and bringing them to the surface, all the way from Yosemite Marsh to the Louis Sutter Baseball Diamond.   The creek daylighting includes the creation of new pathways, sidewalks on Wayland Street, stream crossings, and the creation of a gathering space, “Yosemite Station” at the edge of McLaren Park.   Additionally, the Louis Sutter Soccer Field Pilot Project will involve conducting a five-year pilot project to test a high efficiency irrigation/stormwater reuse system, a first for the City of San Francisco. The Yosemite Creek Daylighting Project is the last of the eight Early Implementation Projects that SFPUC is constructing over the coming years. These projects are part of the Wastewater Capital Improvement Program, a multi-billion-dollar citywide investment to upgrade aging sewer infrastructure.

Daylight a historic creek in San Francisco, a first for the City

The Yosemite Creek Daylighting Project will restore Yosemite Creek’s flow from subsurface pipes to an open water channel by daylighting approximately 1,700 feet of Yosemite Creek between Bacon and Oxford Streets (Yosemite Marsh) and Wayland and University Streets to convey stormwater adjacent to, or within, the right-of-way (ROW) and through McLaren Park before returning to the combined sewer system. An additional 400-foot section of storm drainpipe will convey flow underground through one residential block of Wayland Street, resulting in a total length of new creek run measuring 2,100 linear feet. Bioretention basins along the stream channel will allow water to infiltrate the soil, reducing the volume of stormwater that flows into the combined sewer system. Also, SFPUC will create a gathering space called the Yosemite Creek Station along the creek near the Wayland and Princeton Streets intersection to provide a public amenity, increase public awareness about San Francisco’s urban watersheds and deliver educational opportunities.

The Soccer Field Pilot Project will involve conducting a five-year pilot project to test a high-efficiency irrigation/stormwater reuse system at the Louis Sutter Playground soccer field. Stormwater collected in subsurface storage tanks will be used to irrigate the improved soccer field thereby reducing the Department’s potable water use and improving the soccer field drainage. The SFRPD is providing direction for the pilot project as well as long-term management following the pilot project. A maintenance and monitoring partnership structure is described in the draft MOU, with the SFPUC and SFRPD sharing responsibilities for the pilot project. 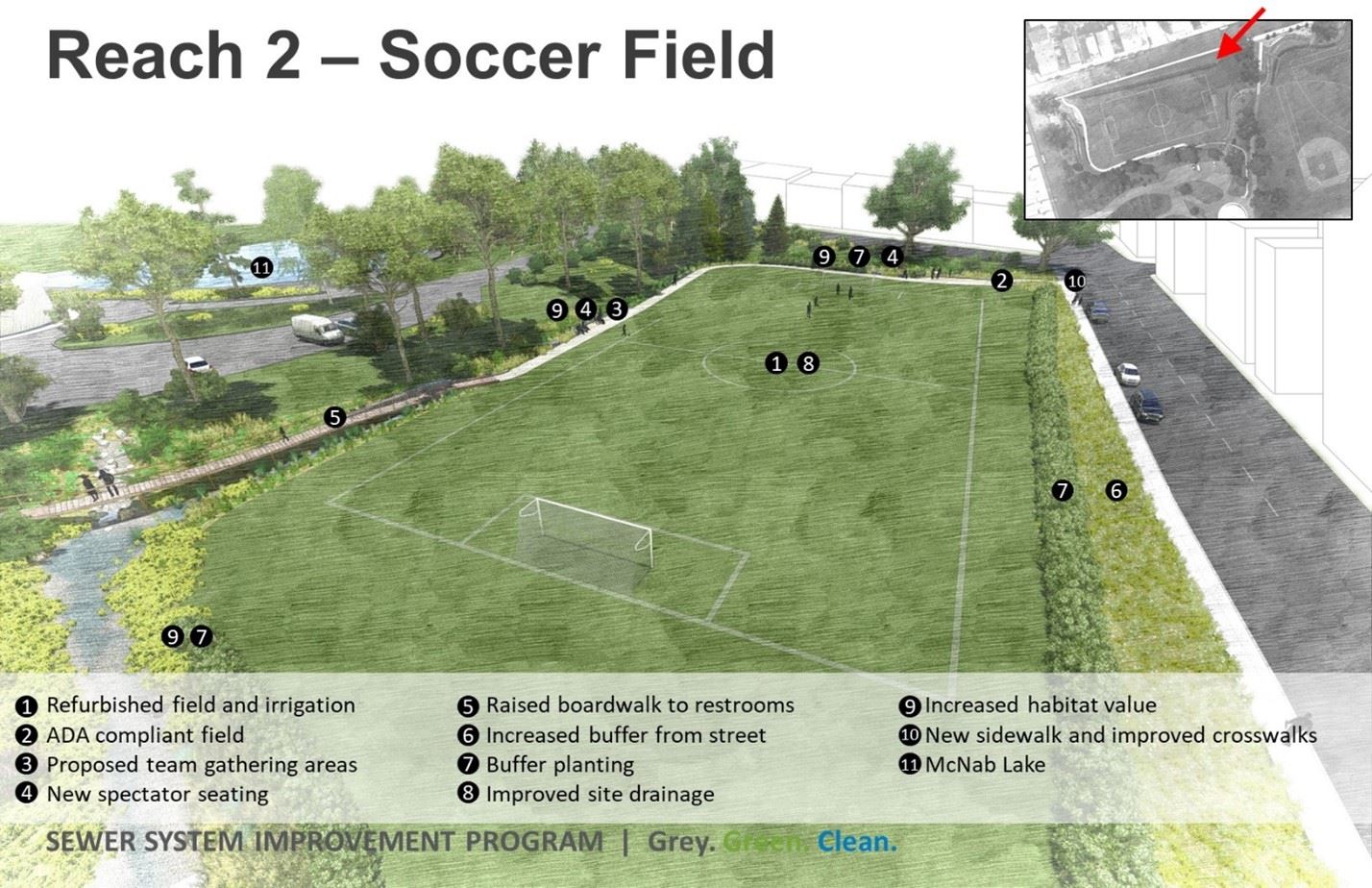 The design of the project will begin in January of 2022 for a duration of 14 months.  Bid and award will take place early 2023 and construction will begin in the second half of 2023.  Specific to the currently active Louis Sutter Soccer Field, construction will be timed to align with the Department’s permitting needs. The expected duration of the soccer field portion will be June 2024 – February 2025, followed by a 3-month turf establishment period.  This project will be monitored for another 5 years following construction and opening in 2025.