People of the Promenade

People of the Promenade is a series of short stories, based on conversations with parkgoers we’ve met along car-free JFK Drive in Golden Gate Park. 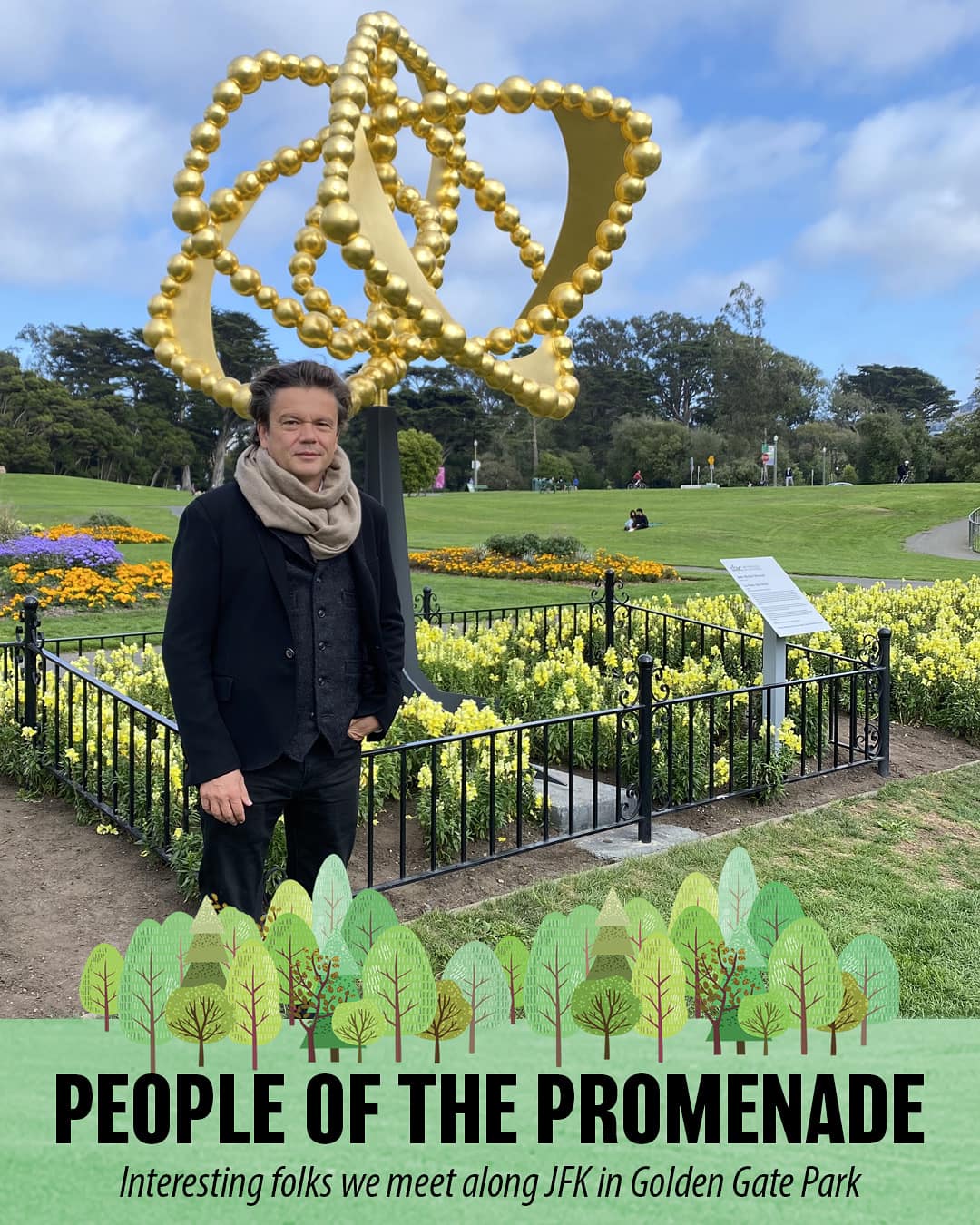 Famed Parisian artist Jean-Michel Othoniel stopped by Golden Gate Park last week for a dedication ceremony for his La Rose des Vents sculpture—a now permanent feature just outside the SF Conservatory of Flowers and very visible from the JFK Promenade. Othoniel, who maintains a permanent commission in the historical gardens of the Palace of Versailles, was inspired to create La Rose des Vents during a visit to the Conservatory, years ago. “I wanted to make this piece like a rose, to bring light to this site,” he said. “It’s a very hopeful work, and when the sun touches it, you’ll see it’s very flamboyant like the architecture itself.” Othoniel added that car-free JFK has created a more “joyful” atmosphere. “In Paris, we have so many cars. Once a week, they’ll stop the traffic, but it’s not all week.” 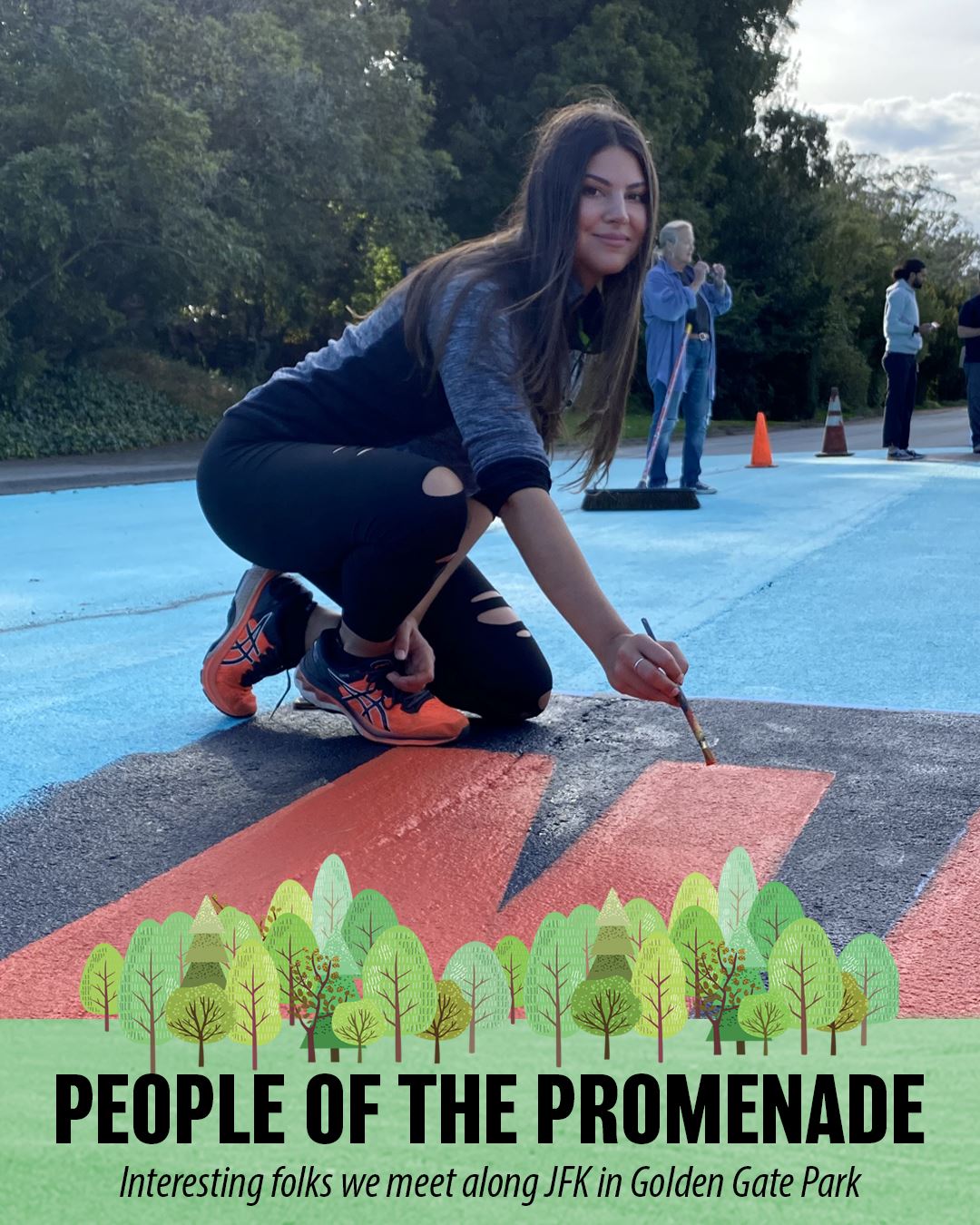 Sharaya, executive director of the American Indian Cultural District SF, tries to go walking along the JFK Promenade as often as she can since she lives near Golden Gate Park. Today, however, she came out to help with a street mural her organization has been collaborating on that will go on JFK Drive, just near the San Francisco Botanical Garden.
The mural, titled “We are on Native Land” by artist Rachel Znerold, is part of Paint the Promenade, which will see several murals being painted along JFK over the coming weeks. “We really wanted to do something that highlights Ramaytush Ohlone land,” she said. “It’s not just about native land, it’s also about honoring the animals that are here. We have conversations about the park and accessibility, but there are very few places in San Francisco that are non-developed where the coyotes go, where the hawks go.”
She added, “There’s a collective responsibility that we as people have to these plants, to these animals, to protecting parks, and to protecting these areas that people utilize every day.” 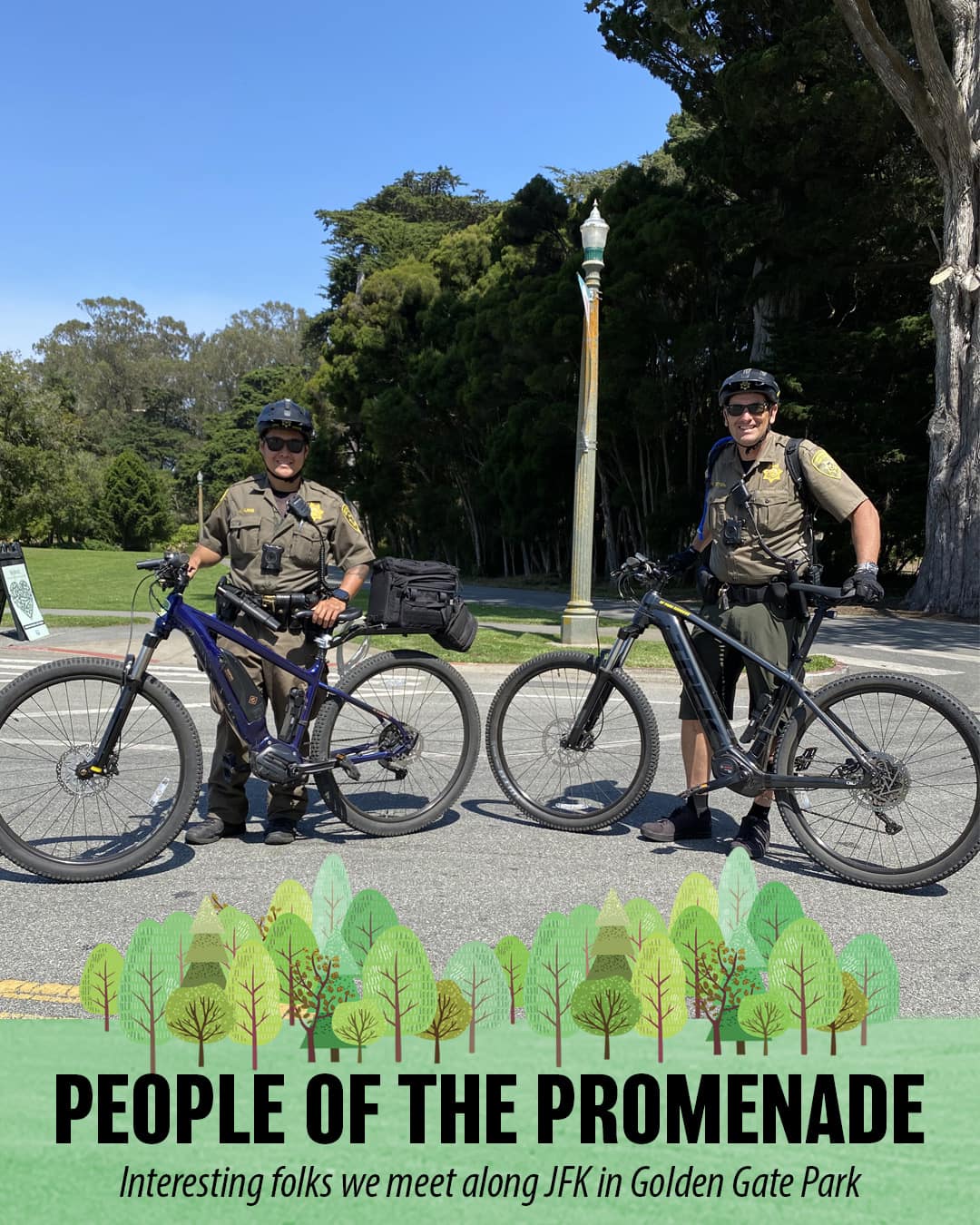 You might see Park Ranger Fung (left) or Park Ranger Totten (right) riding around the JFK Promenade on their electric bicycles, making sure everyone stays safe. “For the most part, it’s pretty self-governing here. People respect the rules. When they see a bicycle coming, they move out of the way or sometimes when there’s a group of elderly people crossing, people will stop,” Fung said. “Now that it’s car-free, it has changed a lot.”

But, while biking on JFK Drive is one of the more fun parts of their job, the bikes are also useful for trekking dirt trails and footpaths deep inside the park. “Sometimes, there are issues in the park that are within these really tight trails and you can’t take even take an ATV through it. It’s basically like a pedestrian foot trail, so having a bicycle really helps me better perform my job,” Fung said. 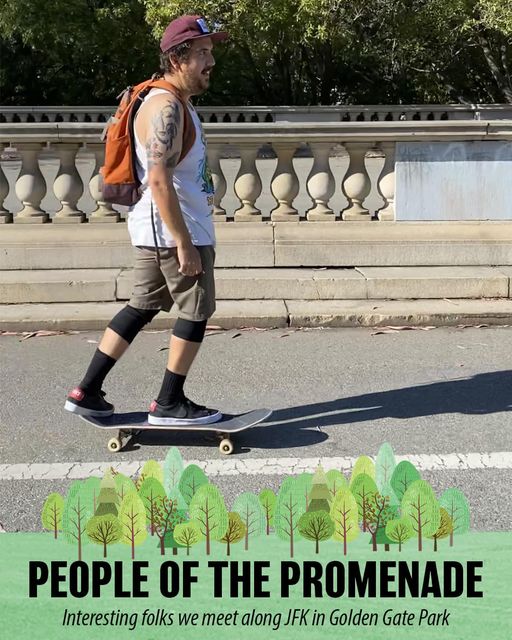 Cole Valley resident Esteban is regular at Golden Gate Park. Usually, he’s skating with friends at the Waller Street Skate Park, but since it’s currently undergoing renovations, he’s on a mission to find other cool spots in the park. “It’s given me opportunities to explore other areas of the park, places that I wouldn’t typically ride around on my skateboard,” he said. “Sometimes, I’m trying to find an area to do some tricks, but a lot of the time I just find myself enjoying the green space, the flower gardens. The dahlia garden is my new favorite spot to go and take a break from the day.”
Although the JFK Promenade isn’t a skate park, Esteban said the serene—yet sometimes bustling—community space it’s become makes it a great place for a novice skater. “A lot of my friends who are learning to skateboard, we come to this space for them to find their footing, and have all this flat, open space to practice. It’s car-free, so that’s a huge plus,” he said. 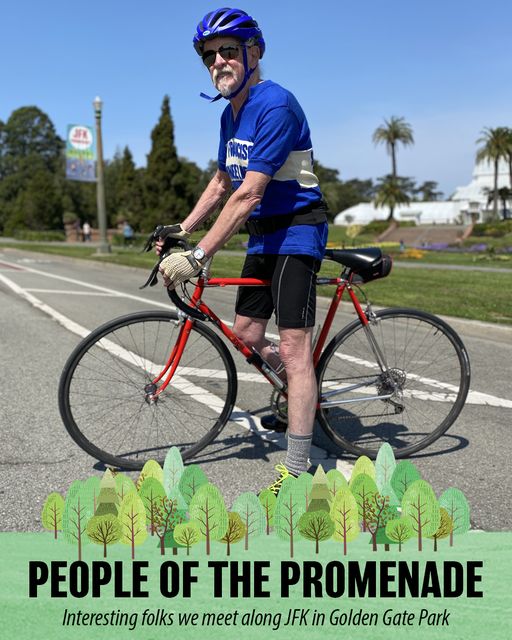 Being active is a priority for Cody, 80, who comes to the JFK Promenade several times a week to bike. Having lived in San Francisco since 1967, Cody remembers the days when car-free JFK Drive was only a thing on Sundays. Now that its seven days a week, he said, the whole landscape of Golden Gate Park has transformed. “It’s much more pleasant to ride without having to pay attention to cars and it’s obviously much safer. It’s also nice to see on weekends when more people are out. It’s a nice community feel,” he said. “It’s certainly changed the atmosphere and usability for people who are not driving. It allows this to feel more like a park.”
Never shy about his love for San Francisco, you can oftentimes catch Cody biking in his signature San Francisco Wheelmen shirt—an homage to the historical club that once dominated the local cycling scene. 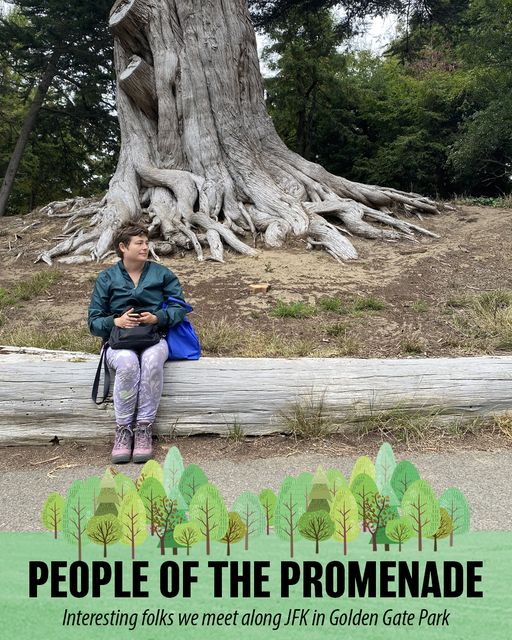 Tomi, a dance enthusiast, comes to Golden Gate Park at least twice a week. She’s either biking along the Promenade with her teenage daughter, or she’s performing outdoor personal dance pieces throughout the park. “Cars don’t really disturb my dancing, but I think making car-free streets is great,” Tomi says.

She and her daughter pedal down JFK to Hellman Hollow, where they join a regular gathering of dancers.  Even though Tomi is all about movement, today she was resting her feet along a quieter section of the JFK Promenade, just near the Rose Garden—enjoying the natural setting and cool fog as she contemplated her next dance piece. “It is really nice to just sit here and not have cars coming by,” she said. 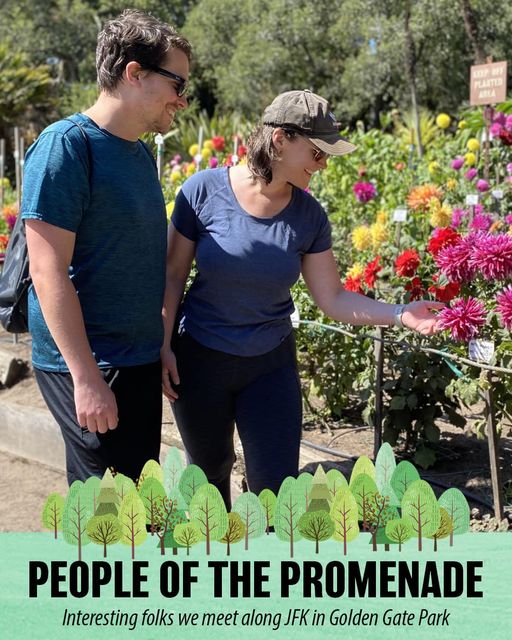 Keeping up with Alex and Anna—both avid pickleball players and bicyclists—can be a challenge. But every now and then the couple likes to take walks along the JFK Promenade, occasionally stopping by the Conservatory of Flowers to smell the dahlias. The lovebirds moved to San Francisco just over a year ago from Philadelphia, and haven’t looked back since. “We wanted a change of scenery,” said Anna. “We went on a road trip during the pandemic and got to do a lot of national parks and be outside. And we were like, ‘Why don’t we live somewhere where we can be outside and do all these sorts of things all the time.’”
Even though Anna and Alex are naturally outdoorsy, the JFK Promenade encourages them to step out more often. “It’s so inspiring seeing people do their thing out here; bikers, rollerbladers, people playing volleyball. It’s just really inviting, and I feel like that’s pushed us more to be outside every day,” Anna said.
Next on their to-do list: skateboarding along the Promenade and rolling around Skatin’ Place! 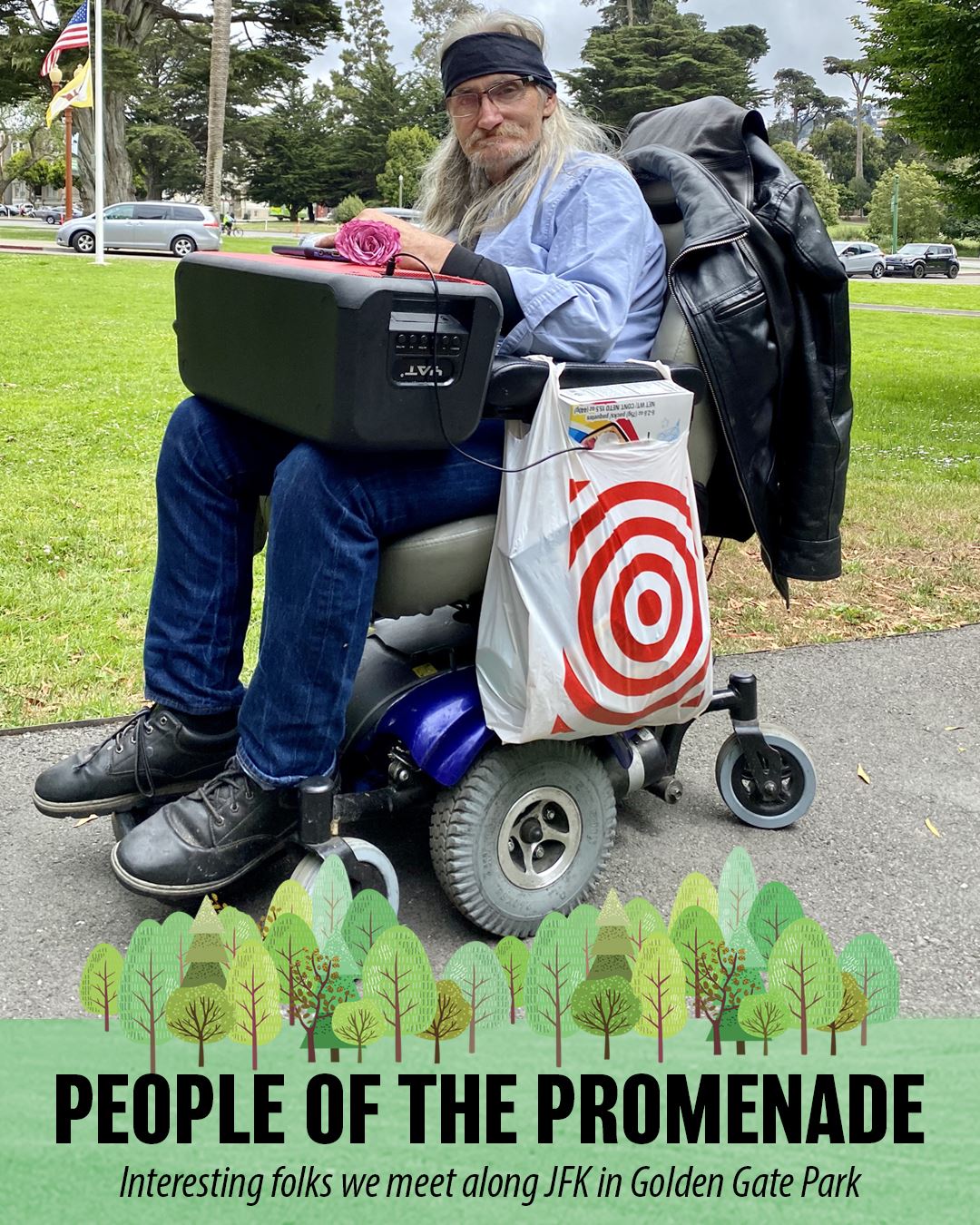 Billy has lived near Golden Gate Park since the psychedelic 1960s. In his time, he’s watched icons like Janis Joplin and The Doors perform at the park. Of Joplin, he said, “To hear the sound of her voice just makes me shiver, you know what I mean? She was something else. She will always be my favorite.”

Having witnessed the evolution of Haight Street and Golden Gate Park over the decades, he laments, “It’s not the same anymore.” But Billy doesn’t mind the recent car-free changes, because now he can cruise the Promenade with ease as he listens to blues music on his speaker. 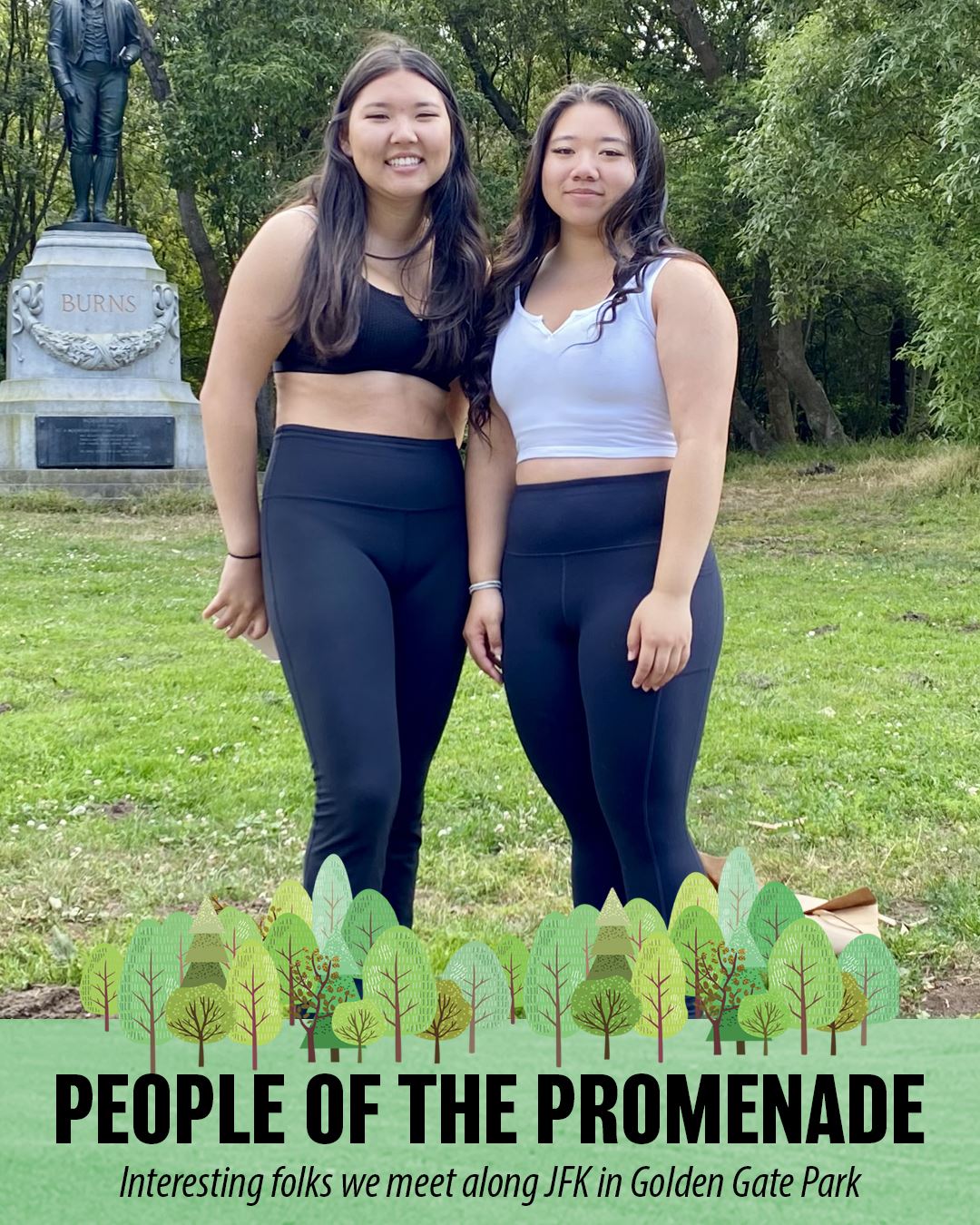 It’s not a stretch to say that Nadine (right) and her best friend Kelsey (left)—both Washington High School cheerleaders—enjoy practicing their moves along the Promenade. “I love it because it’s a really open space and you can do just about anything and not have to worry about whether cars are coming or not. You can just be free!” said Kelsey.

On top of cheering, the two besties also enjoy the park in other ways: roller-skating, picnicking, holidays, birthday parties—you name it. 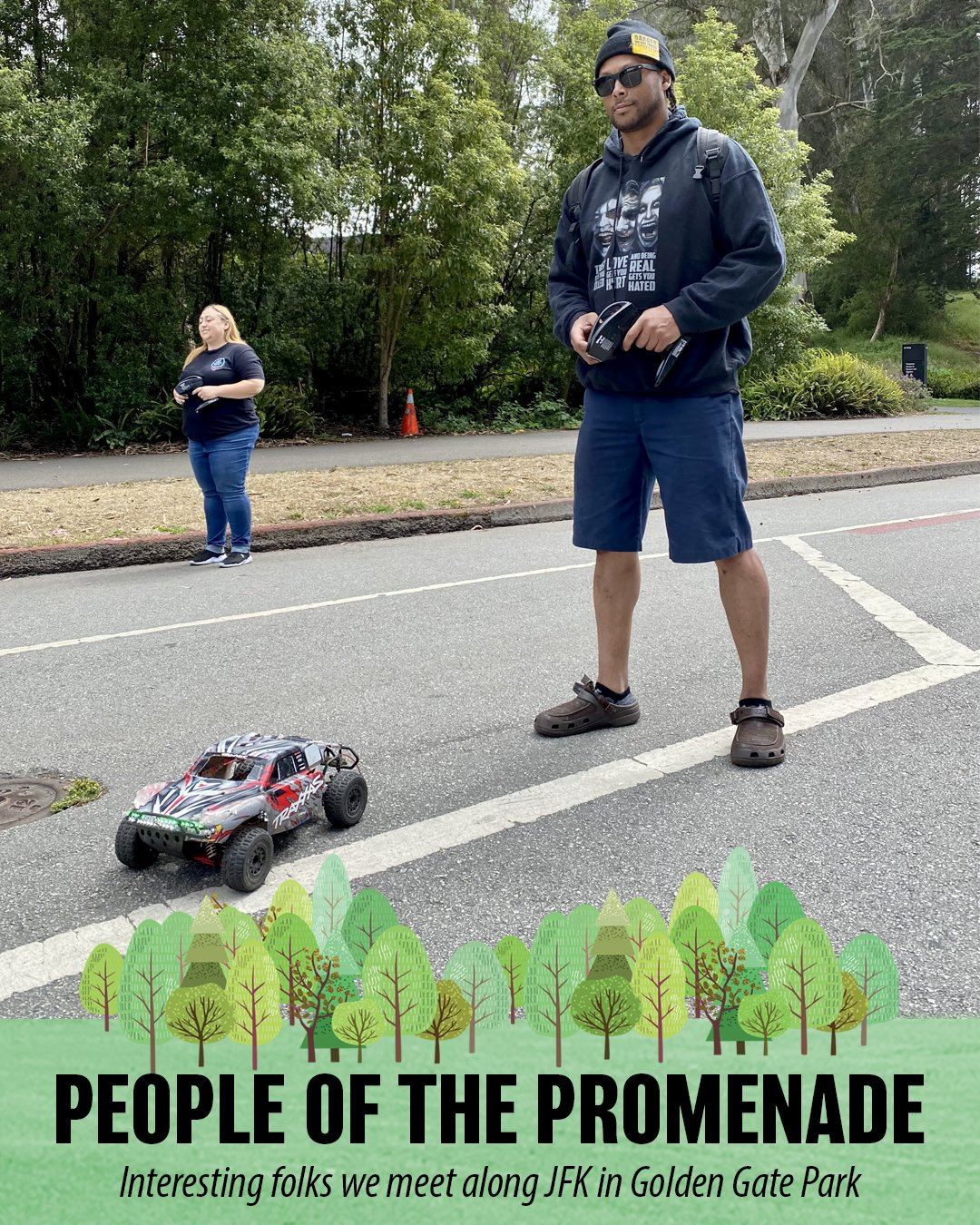 Alfonzo’s hobby includes cars—tiny ones to be exact. He comes to the Promenade on his days off to fulfill his need for speed with his remote-controlled cars.

The mini machines are fast, but he’s always watching out for bicyclists and pedestrians. “These things can dodge just about anything,” Alfonzo said.

And while he’s all about his cars, he also likes the tranquility of the Promenade. “We come whenever we have a chance. JFK has calmed down a lot and allows more people to see what’s going on.” 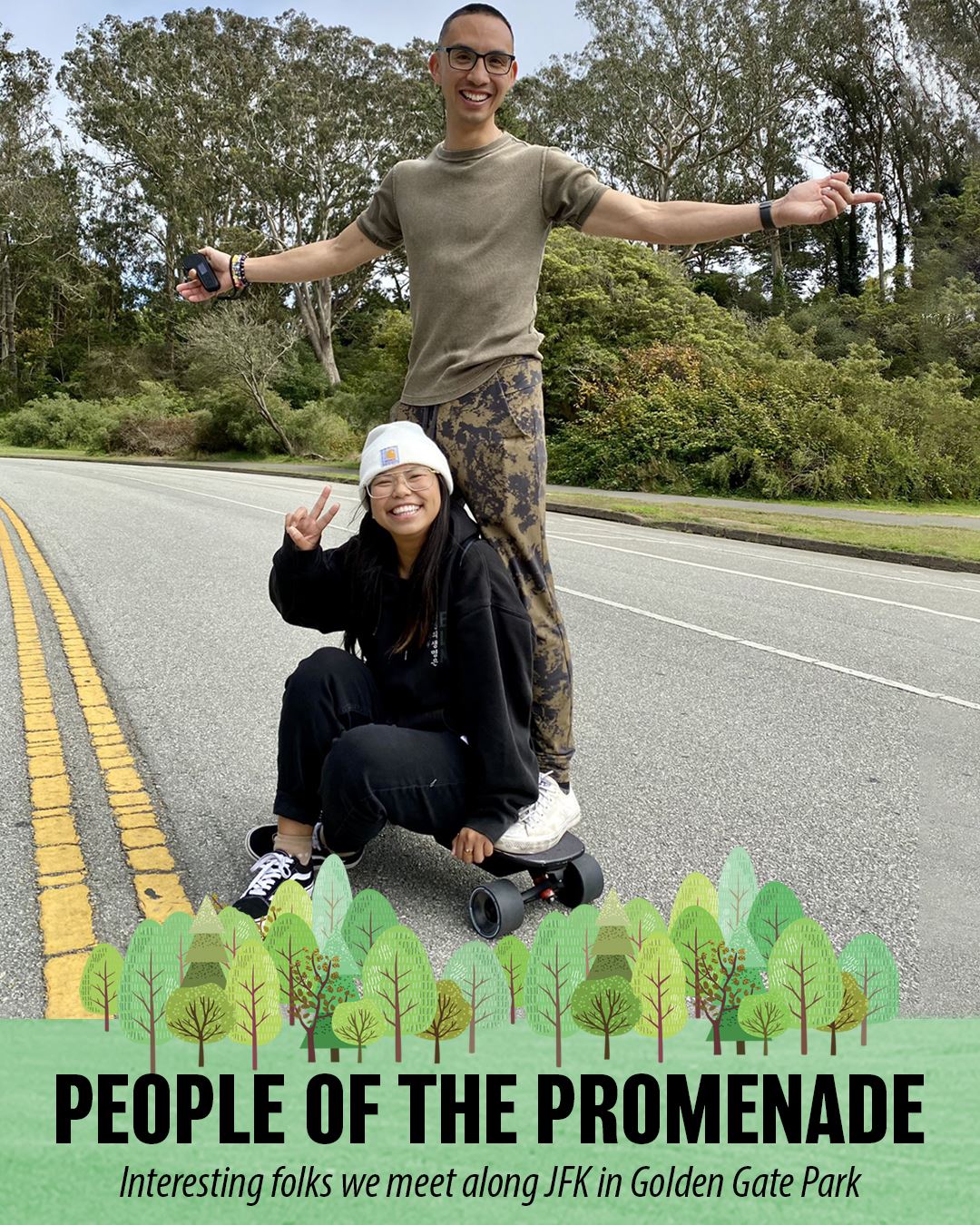 If you ask Nicky (top), the San Francisco Conservatory of Flowers is the best spot in Golden Gate Park. But today he opted to join Joy (below) and try out her electric skateboard along the JFK Promenade.

“It’s pretty sweet because now we have free reign to do this. I wouldn’t feel safe doing this if cars were here,” Nicky said.

“This is our practice area,” Joy said. “I feel safer riding here than the streets.”

The board, which is controlled by a small handheld device, can go as fast as 30 mph. For now, however, the pair is playing it safe.

“This is my very first time,” Nicky—an avid snowboarder—said. “I’m just scared of the concrete. If I fall on snow, it’s perfectly fine because it’s very forgiving. So, I’m trying not to fall.” 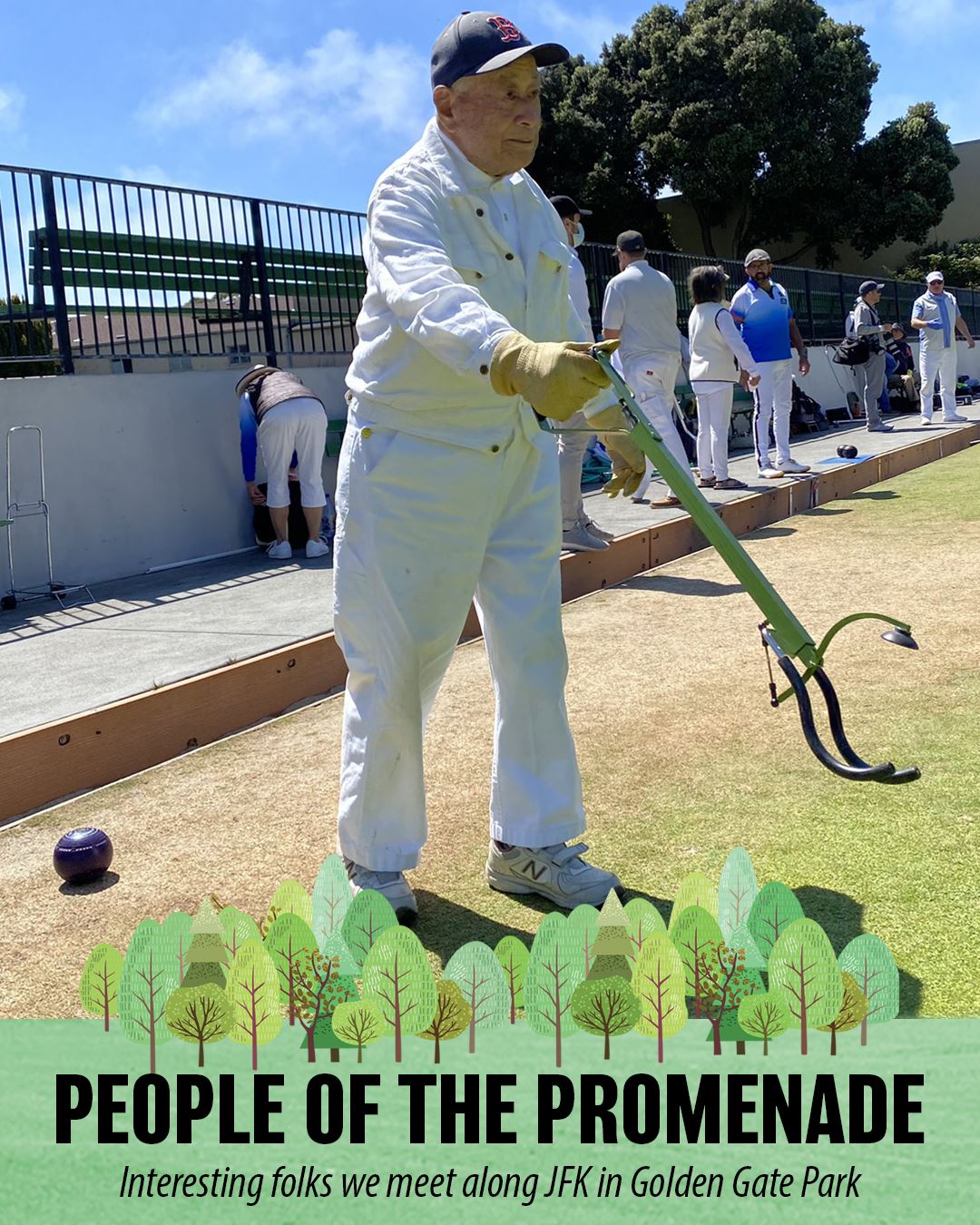 100-year-old Arnie has witnessed San Francisco make some big changes since he first moved to the city in 1957. One place that continues evolving for the better is Golden Gate Park, he says. The JFK Promenade is a 3-minute stroll from his second home--the San Francisco Lawn Bowling Club. He’s been coming here for the past 32 years.

“I came one day to try it and I liked it, and I’ve been stuck on it ever since,” he said. “I enjoy the open air, and all the good people that are around. I really enjoy everything about it. It’s really a community… and this is about the cheapest thing you can find compared to other sports.”

“When I was about 90 years old, I figured ‘I’m going to pass out and whither in a couple years. What’s the sense of going?’ But then, I just kept on going and now I’m 100 years old.”

On his most recent birthday, the San Francisco Board of Supervisors declared July 26, 2022, Arnie Barros Day.