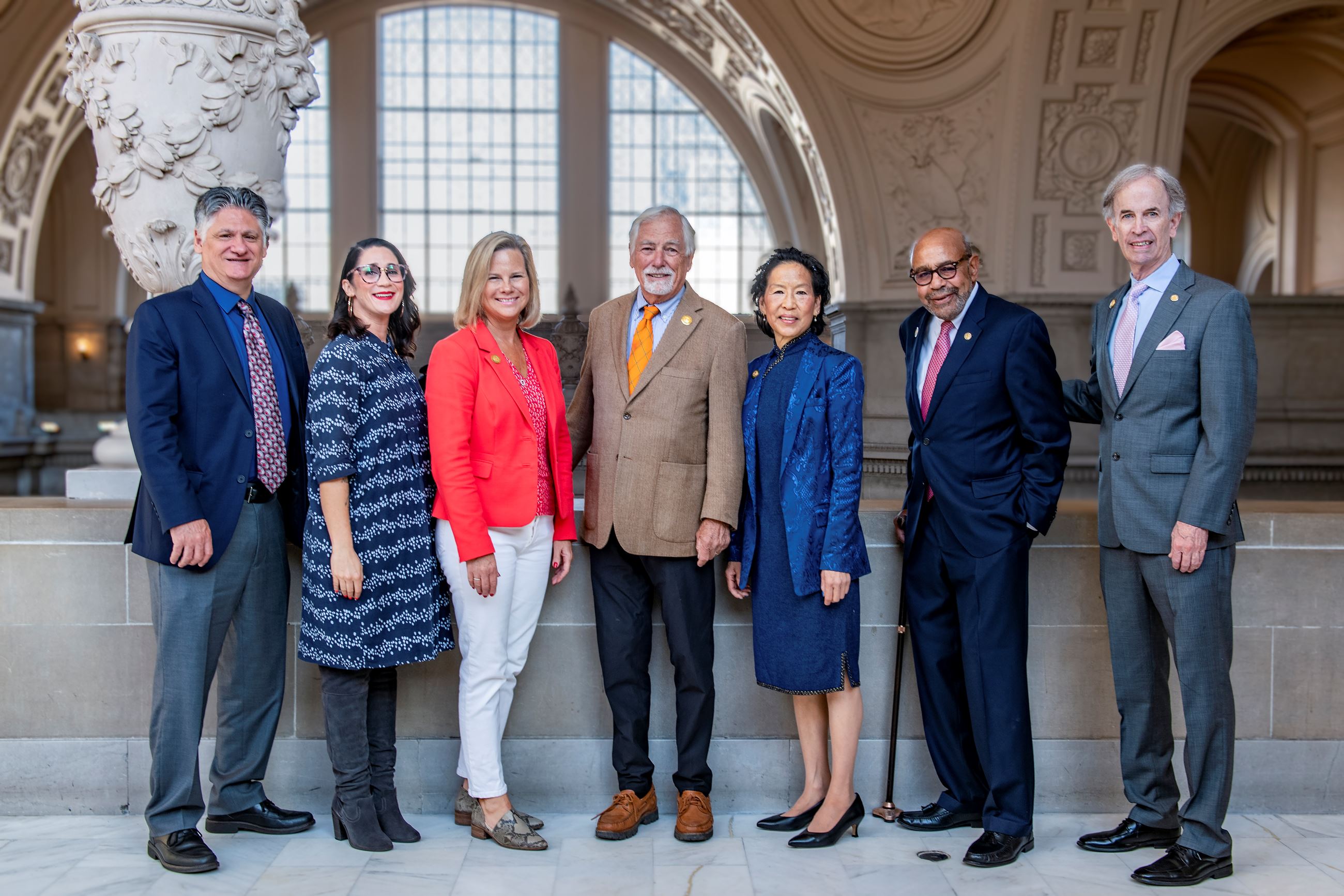 Recreation and Park Commissioners can be contacted through the Commission Secretary’s Office.

The Recreation and Park Commission operates on a committee structure, and includes the Capital Committee, the Operations Committee and the Joint Zoo Committee. Remote meeting access information is available at the top of each meeting agenda.

*Meeting dates/times are on a regular schedule, but may vary. To confirm meeting dates/times/locations, please view the upcoming calendar below. Committee meetings will be remote until further notice.

Virtual Public Comment: Remote comment is available for both Committee and full Commission meetings. Remote meeting instructions will be at the top of each meeting agenda with information about how to listen, view and comment at the meetings. When dialing in for public comment, ensure you are in a quiet location, speak clearly and turn off background sounds. Wait for the item you would like to speak on to be called. When prompted, dial *3 to be added to the queue to speak. The system will notify you when you are in line and waiting.

In-Person Public Comment: In-person public comment is currently only available at full Commission meetings. Speakers are asked to fill out a speaker card and submit it to the Commission Secretary at the beginning of the meeting, if possible. Speakers will be called during the item noted on the card to address the Commission.

In addition to the office of the Mayor, the executive branch of the City and County shall be composed of departments, appointive boards, commissions and other units of government. To the extent law permits, each appointive board, commission, or other unit of government of the City and County established by state or federal law shall be subject to the provisions of this Article and this Charter.

Unless otherwise provided in this Charter, the composition of each appointive board, commission or advisory body of any kind established by this Charter or legislative act of the United States of America, the State of California or the Board of Supervisors shall:

1. Be broadly representative of the communities of interest, neighborhoods, and the diversity in ethnicity, race, age, and sexual orientation of the City and County and have representation of both sexes; and

2. Consist of electors of the City and County at all times during the term of their respective offices, unless otherwise specifically provided in this Charter; or in the case of boards, commissions or advisory bodies established by legislative act the position is (a) designated by ordinance for a person under legal voting age, or (b) unless specifically exempt from the provisions, or waived by the appointing officer or entity upon a finding that an elector with specific experience, skills or qualifications willing to serve could not be located within the City and County.
Vacancies on appointive boards, commissions or other units of government shall be filled for the balance of the unexpired term in the manner prescribed by this Charter or ordinance for initial appointments.

Terms of office shall continue as they existed on the effective date of this Charter.

Unless otherwise provided in this Charter, each appointive board, commission or other unit of government of the executive branch of the City and County shall:

1. Formulate, evaluate and approve goals, objectives, plans and programs and set policies consistent with the overall objectives of the City and County, as established by the Mayor and the Board of Supervisors through the adoption of City legislation;

2. Develop and keep current an Annual Statement of Purpose outlining its areas of jurisdiction, authorities, purpose and goals, subject to review and approval by the Mayor and the Board of Supervisors;

4. Recommend to the Mayor for submission to the Board of Supervisors rates, fees and similar charges with respect to appropriate items coming within their respective jurisdictions;

5. Unless otherwise specifically provided, submit to the Mayor at least three qualified applicants, and if rejected, to make additional nominations in the same manner, for the position of department head, subject to appointment by the Mayor;

7. Conduct investigations into any aspect of governmental operations within its jurisdiction through the power of inquiry, and make recommendations to the Mayor or the Board of Supervisors;

8. Exercise such other powers and duties as shall be prescribed by the Board of Supervisors; and

9. Appoint an executive secretary to manage the affairs and operations of the board or commission.

10. In furtherance of the discharge of its responsibilities, an appointive board, commission or other unit of government may:

11. Hold hearings and take testimony; and

12. Retain temporary counsel for specific purposes, subject to the consent of the Mayor and the City Attorney.

Each board or commission, relative to the affairs of its own department, shall deal with administrative matters solely through the department head or his or her designees, and any dictation, suggestion or interference herein prohibited on the part of any member of a board or commission shall constitute official misconduct; provided, however, that nothing herein contained shall restrict the board or commission's powers of hearing and inquiry as provided in this Charter.

As of the operative date of this Charter and until this requirement is changed by the Board of Supervisors, each board and commission of the City and County shall be required by ordinance to prepare an annual report describing its activities, and shall file such report with the Mayor and the Clerk of the Board of Supervisors. The Annual Report can be included in the Annual Statement of Purpose as provided for in Section 4.102(2).

Unless otherwise provided in this Charter, each appointive board, commission or other unit of government of the executive branch of the City and County shall:

2. Hold meetings open to the public and encourage the participation of interested persons. Except for the actions taken at closed sessions, any action taken at other than a public meeting shall be void. Closed sessions may be held in accordance with applicable state statutes and ordinances of the Board of Supervisors.

3. Keep a record of the proceedings of each regular or special meeting. Such record shall indicate how each member voted on each question. These records, except as may be limited by state law or ordinance, shall be available for public inspection.

Pursuant to the policies and directives set by the Commission and under the direction and supervision of the General Manager, the Recreation and Park Department shall manage and direct all parks, playgrounds, recreation centers and all other recreation facilities, avenues and grounds under the Commission's control or placed under its jurisdiction thereafter, unless otherwise specifically provided in this Charter.

The Department shall promote and foster a program providing for organized public recreation of the highest standard.

The Department shall issue permits for the use of all property under the Commission's control, pursuant to the policies established by the Commission.

As directed by the Commission, the Department shall administer the Park, Recreation and Open Space Fund pursuant to Section 16.107 of this Charter.

1. No building or structure, except for nurseries, equipment storage facilities and comfort stations, shall be erected, enlarged or expanded in Golden Gate Park or Union Square Park unless such action has been approved by a vote of two-thirds of the Board of Supervisors;

2. No park land may be sold or leased for non-recreational purposes, nor shall any structure on park property be built, maintained or used for non-recreational purposes, unless approved by a vote of the electors. However, with permission of the Commission and approval by the Board of Supervisors, subsurface space under any public park, square or playground may be used for the operation of a public automobile parking station under the authority of the Department of Parking and Traffic, provided that the Commission determines that such a use would not be, in any material respect or degree, detrimental to the original purpose for which a park, square or playground was dedicated or in contravention of the conditions of any grant under which a park, square or playground might have been received. The revenues derived from any such use, less the expenses incurred by the Department of Parking and Traffic in operating these facilities, shall be credited to Recreation and Park Department funds.

The Commission shall have the power to lease or rent any stadium or recreation field under its jurisdiction for athletic contests, exhibitions and other special events and may permit the lessee to charge an admission fee.

Members of the Recreation and Park Commission each completed the training on the dates shown below: